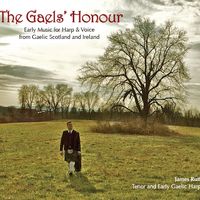 From the recording The Gaels' Honour: Early Music for Harp & Voice from Gaelic Scotland and Ireland

MacGregor’s Search
From the 1895 Gesto Collection of Highland Music, as well as Daniel Dow’s 1776 publication: A Collection of Ancient Scots Music. This pipe piece refers to the MacGregors, whose family name was ‘altogether abolished’ by King James VI/I. Until the law was finally repealed in 1774, anyone bearing the name MacGregor was to be put to death. Many were hunted like animals, flushed out of the heather with bloodhounds, and killed. The pipes and the Clarsach have an ancient partnership and it makes sense that some of the ancient harp music was inherited by the younger instrument, the pipes. This piece is also closely related to the Gaelic songs: Tha Gruagach san Aodan, and Bothan Àiridh ‘m Bràighe Raineach.